Every October one of the world’s best athletes visits downtown Minneapolis, wins five matches in dominating fashion and leaves town with the trophy.  He’s been doing it since 2010.  He’s got style, charisma and humility. He’s as good with the fans as he is on the court.  Yet, almost nobody in the Twin Cities notices.

Kane Waselenchuk won his eleventh US Open Racquetball Championship on Sunday. Universally regarded as the greatest racquetballer of all-time, he’s won eight straight US Opens, including all six held at Lifetime Fitness in Target Center.  His 11-5, 11-8, 11-3 sweep of Daniel De La Rosa was a typical performance.

“It never gets old,” Waselenchuk, who turns 34 next month, said after Sunday’s final.  “I think as I get older, I start appreciating it a little more.”

His talents are obvious – hand-eye coordination, fast-twitch muscle reflexes, shot-making creativity and of course the classics; speed, quickness and leaping ability. The Canadian born, Texas resident’s insatiable drive however, is the real secret to his genius. After doing it all and then doing it again and again, Waselenchuk consistently finds new motivations.  And, like many elite athletes, he’s not above inventing them.

“One thing that is always overlooked about my game is my conditioning,” he explained. “I would like to think that I have shown everybody that I am not just talented on the court, but that I also work hard at what I do.”

While that belief may help him get out of bed for a grueling, early morning workout, there is nobody doubting Waselenchuk’s fitness and work ethic.

When it comes to media coverage and the sport’s exposure however, Waselenchuk doesn’t need to use his imagination to feel slighted.  Racquetball, despite his brilliance and star power, is ignored by the mainstream sports media.  Out of a deep love for the sport, he is genuinely disheartened by his inability to change that.

“I am not frustrated because I am self-loathing and I want it for myself,” he commented in 2014. “I just think that if companies and people would just give us a shot, we wouldn’t let them down. I speak for all of us, it’s just not me. We are a family – racquetball is a family – and we really, really need something to happen and I would really like it in the time that I am here. I know that I am getting older and once upon a time, time was on my side, but it’s not on my side (now), I am just delaying the inevitable now. I just feel that we all deserve it collectively as a group.” 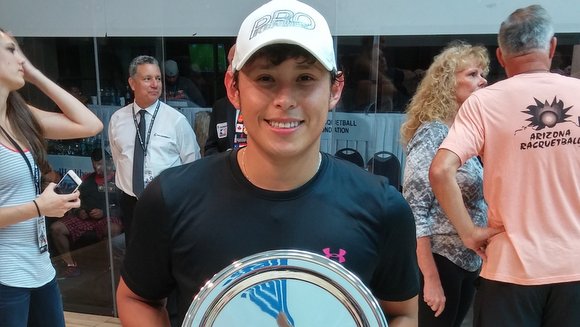 Waselenchuk’s opponent in Sunday’s final, the 22-year-old De La Rosa, has been billed as the “Future of Racquetball.” When discussing the youth of his sport, Waselenchuk comes off as a mix of reformer, advocate, sage advisor and even a bit crotchety.

“We have to get these clubs that have racquetball courts to allow these young kids to get in there and play,” he emphasized. “I was given an opportunity when I was young to go on the court and play. We didn’t have these rules where you needed to be 14-years-old to get in the club…Embrace the young kids who are on the court, they are the future of our sport.”

Of De La Rosa, he offered praise, calling him “a great kid, very respectful” and acknowledged his talent. He tempered that with and dose of reality and, finally, a challenge. “When you are young like that, there are so many things that can happen,” Waselenchuck pointed out. “Maybe he goes back to school; maybe he gets married and has a kid. Things change. Hopefully, he stays focused because the reality is; he is the future of the sport. Him and Jose Rojas, a few other guys coming up and probably guys that we don’t even know yet that are practicing right now. I like the challenge, I like to battle, I like the competition. I am here and I am ready for them to step up.”

There was also, the “back in my day” complaint, “I didn’t have all of the temptations that are out now like Twitter, the Internet and all this kind of stuff,” the veteran opined. “I think that the younger generation of kids – it’s about convenience.  When I was younger, you had to work for what you wanted and work to where you wanted to get. The world is built on convenience now.”

Thus far, Waselenchuk has been immune to complacency, the comfortable of aspect human nature that spells ruin for a top-tier athlete. “I am not content with what I have done yet,” Waselenchuk emphasized. “Trust me, I am very proud of myself, I have put in a lot of hard work, sacrificed a lot of things to get where I am, but I am still in it. I don’t plan on going anywhere for years to come.”

With his dominance so complete and hunger still intact, it’s hard not to speculate about the deeper, more personal aspects of his motivation. Waselenchuk hasn’t elaborated when directly asked, but when talking about his daughters, Kennedy and Kendall, he may have tipped his hand.

“They are at an age now where I think they are starting to understand what I am doing. I would say that for me, that’s probably the most gratifying thing,” the father of two commented.  “I always wanted them to just remember me for what I was doing, not for what I had already done; ‘Hey, my dad used to play this sport racquetball or something.’”

As Waselenchuk enters his mid-30s, he’s conscious of his place in racquetball history, “I think that when I step away from the game, the most important thing for me would be how I treated people off the court and racquetball fans in general,” he reflected. “It’s kind of easy to be a good ambassador on the court, but that’s only half the job. I hope that when I walk away from the game, they say I am the greatest player ever to play, not only that but, I was the nicest guy in the world off the court.”

5 thoughts on “The Greatest Athlete You’ve Never Heard Of”